Warriors of the 16th Empire 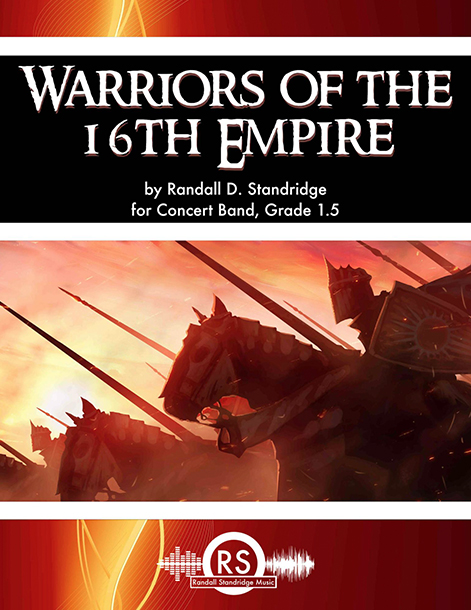 Warriors of the 16th Empire

About Warriors of the 16th Empire

For those of you that are unaware, I was a band director for twelve years.  During my time in that occupation, I created many works that had specific educational goals, but would also fit into our concert repertoire as, what I hoped, would be engaging pieces for both the players and the audience.  I always struggled to find music that introduced new concepts in achievable, yet meaningful, ways.

Following Fanfare for the 16th Empire, Warriors of the 16th Empire is the second in a series of works  intended as a tool to develop young players’ abilities to correctly time, articulate, and perform sixteenth notes.  Secondly, it is intended to be an exciting work that makes the students run to rehearsal, slinging their bookbags across the room in their hurry to get their instruments out and get seated, ready to play.  Lastly, it was a chance for me to satisfy both the educator and composer sides of my personality, as the work is a fanfare for an imaginary “lost” empire, full of kings, warriors, vast armies, and adventurous terrain.

In this work, one should imagine a legion of warriors under a blazing sun, holding their weapons aloft, ready for battle.  Are they ancient?  From the future?  Monsters?  Robots? That is up to the player and listener to decide.

TO PURCHASE:  Please send us an email at randallstandridgemusic@gmail.com