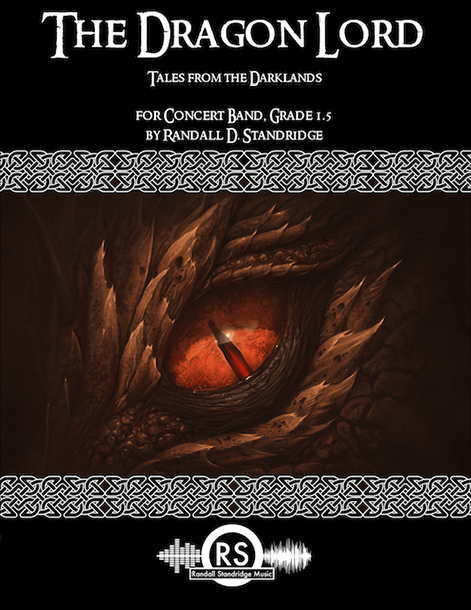 The Dragon Lord is a mythical figure from the Darklands, who is said to live in the mountains that border the kingdom.  His shadow is occasionally glimpsed flying above the clouds, and, more often, his lonely, terrifying roar can be heard echoing from the ebony cliffs where only fools would dare to go.  In this piece, we come face to face with this monstrous giant in all of his fury and power.

Educational goals of the work:

-Rhythmic stability and vocabulary in 4/4 Time

-Teaching Chromaticism at a basic level and with limited range.  Copyable Chromatic exercise sheets have been included with this work and are keyed for all instruments

A few years back, I created a narrative work for concert band entitled The Darklands Symphony, which told the tale of several characters and places that I have created over the years in my imagination through stories, art, and, finally, music.  All of the pieces were at the Grade 2-2.5 level, and were very well received. I thought I was done with the Darklands.

New stories and new figures have populated that world and I felt drawn to the subject matter again.  Thus, we are beginning a whole new volume, titled Tales from the Darklands.  Unlike the Symphony, the “Tales” series will not be one long story but, rather, small individual tales that give more back story and depth to the Darklands Universe.  Also, the entire “Tales” series will be written at the Grade 1-1.5 level, opening up the Darklands to a whole new level of players. Each “Tales” piece will be accompanied by supplemental material online, which may be found at my website (beginning October 2020).