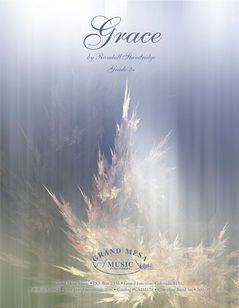 Grace was written at the request of my friend, Steven Cazort, in honor of his father, Ricky Eugene Cazort. Ricky grew up in Dewitt, Arkansas. He married his high school sweetheart, Kathy, and they had two children, Steven and Amy. By all accounts, he was a good father, a good husband, and a good man. He enjoyed fishing, hunting, and keeping his truck clean. Steven inherited his father’s looks, Amy, his temper, and they both demonstrate his knack for straightforward talk and hardheadedness. I never had the pleasure of meeting Ricky. He passed away in 1997, shortly before Steven and I became acquainted. I have grown to love his family and cherish their friendship, so I was honored when Steven asked me to write this piece. Grace is inspired by the traditional hymn, “Amazing Grace,” originally written by John Newton. The piece begins with a solo trombone (Steven’s instrument) and is answered by a solo clarinet (Amy’s instrument). Instead of simply arranging the melody of “Amazing Grace,” I have used fragments of the melody as motives, such as the perfect fourth that begins the song, as well as note progressions that correspond with “…how sweet the sound…” and others to construct new melodies. Near the end of the piece, the original hymn is heard, though the harmonic progressions is mildly altered. If you did not have the pleasure of knowing Ricky or his family, simply imagine this piece was written for someone who was once close to you; find your own sense of “grace.” Find peace, love, and happiness in those around you now. I like to think this would be Ricky’s advice to us all.