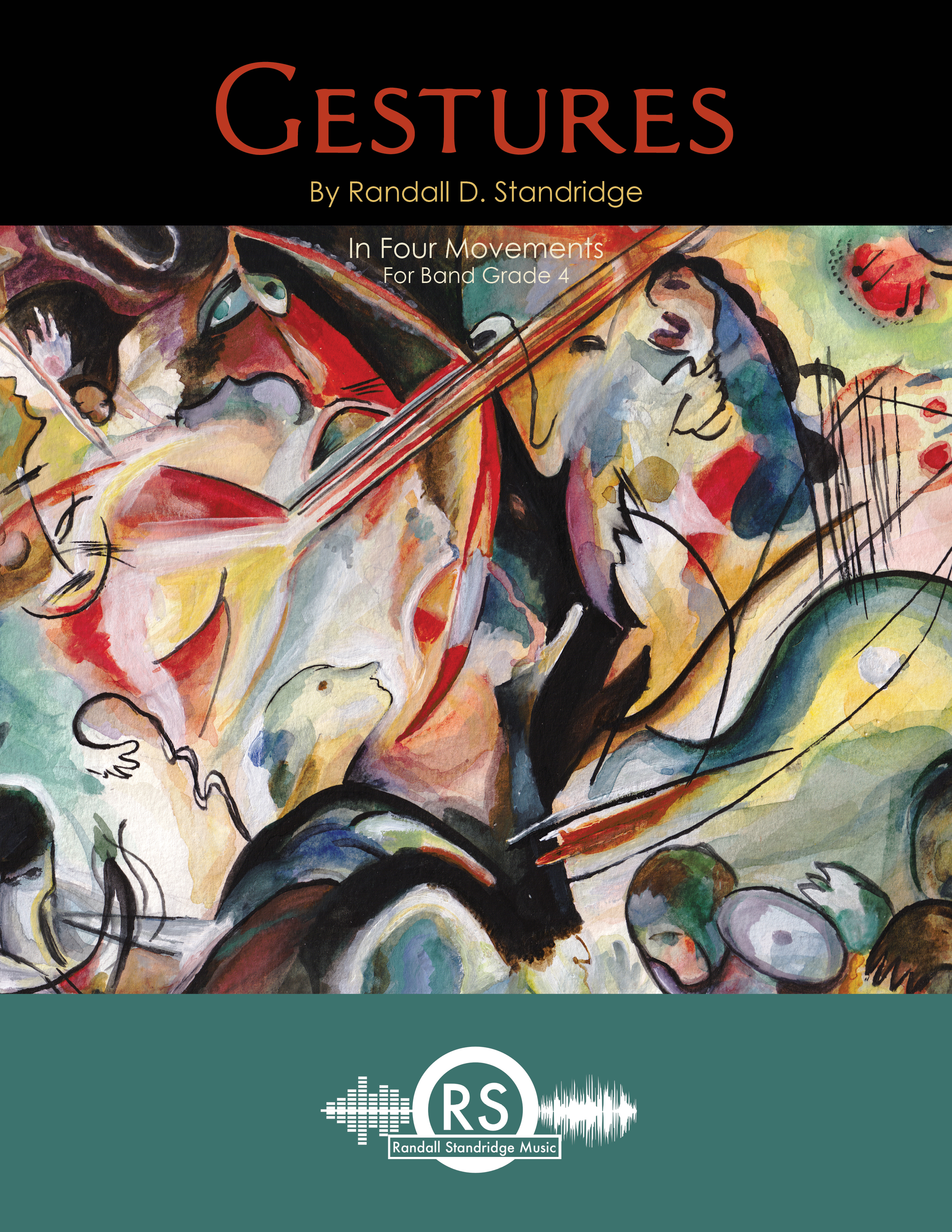 This four-movement work is a celebration of conductors and the gestures they use to communicate. After an opening of warm-up sounds, an exciting mixed-meter movement ensues, followed by a Grainer-esque second movement. The third movement is a musical hug with rich lyrical lines, then the seafaring flavor of the finale gives expression to new ideas and suggests new adventures to be had.

When I look back on my career, I have been very fortunate for a number of reasons. One of those reasons is my friendship with both Dr. Kenneth Singleton and Dr. Richard Mayne.  Both of these gentlemen served on the editorial board of Grand Mesa Music for many years, during which time I was just beginning to publish with the company.  To say that they both had a profound impact on my career is an understatement.  They were always available to give me advice, criticize my work, and help me see my writing and pieces in ways I had never considered.  A great deal of the success I have enjoyed has been because of their guiding hands and ears, and I am forever grateful.

Thus, I was overjoyed and honored when Dr. Mayne and the University of Northern Colorado Bands asked me to create a work to celebrate the retirement of Dr. Singleton.  While the work was intended as a celebration for Ken, it’s really for both of them.

I.  A Smile and a Firm Handshake (Meter)

The first movement begins with an aleatoric section that should sound like musicians warming up before a concert.  As the conductor approaches the podium, the musicians slowly lock in on a unison note that should grow in intensity and create a sense of anticipation.

This movement is intended to be a big “hello” to the audience.  Its positive energy and mixed meter should create a sense of unbridled joy that should make the audience and conductor smile.

II.  An Invitation to Dance and a Poke in the Ribs (Style)

One of my favorite works of all time is Molly on the Shore by Grainger.  So much so, in fact, that I actually named one of my dogs after the piece (though I call her “Molly-on-the-floor”).  I have always loved the mix of technical demand and lyricism that the piece uses to create its unique tapestry of dance and song.

This movement is a humorous homage to that work and to the personalities of many conductors who use humor and wit in their daily rehearsals to connect with players and audiences.  I have never understood why so many composers and academic musicians shy away from this basic human emotion, deeming it unworthy of their time.  Laughter and hilarity permeate our world, and it has just as much a place in the realm of musical vocabulary as any other mode of expression.

Lastly, a mental image.  As I was writing this movement, I imagined the “Molly” of the song as a real person, but who had come into her latter years during the turn of the century, just when automobiles would have become commonplace.  I imagined an elderly Molly driving around town, terrorizing pedestrians, and giving her own “gestures” to screaming citizens who cry their criticism of her driving to the heavens as she flies by, laughing.  Consider this movement to be subtitled “Molly on the Shore Goes to Hades.”

To me, the relationship between conductor and musician is very close. There has to be a sense of trust, affection, and common purpose.  A musical “hug” if you will. Small gestures of affection such as these, whether it be a hug, a handshake, a smile, or even in this modern age, a text to ask “how are you”, are how we connect to one another.

The third movement is lyrical in nature, providing a perfect contrast to movement two.  It explores the more expressive side of conductors, allowing many opportunities for rubato, dynamic expression, and visual lyricism from the conductor’s movements.  The overall feel should be hyper-emotional and dramatic.

IV.  A Wave Goodbye; Reaching towards the Horizon (Changes)

With Dr. Singleton’s retirement, I felt a wave goodbye would be the perfect ending to the work.  This movement has a somewhat sea-faring flavor, expressing the idea of new beginnings and new adventures to be had.

As a side note, I always prefer to say “see you later” rather than “goodbye” as it leaves open the possibility of our meeting again.