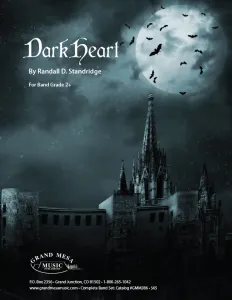 DarkHeart is the fifth and final movement of The Darklands Symphony, following the wildly successful first movement Darklands March. This symphony finale wraps the work up in a very gripping way, musically depicting a daring escape from the castle DarkHeart. As in the other movements, the plainchant Dies Irae is used prominently as thematic material that ties the entire symphony together. DarkHeart can very successfully be performed as a stand-alone work.