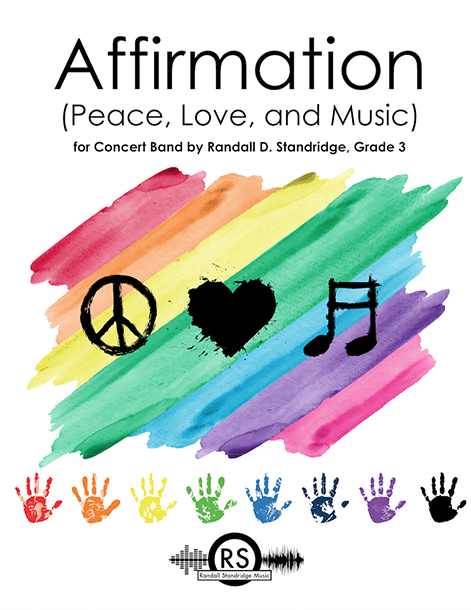 This one is for all the outcasts, the geeks, the marginalized, the wallflowers, and the people who are “different.” Every once in a while, I believe you get to “say something” with a piece of music. When I was in High School, I was definitely NOT one of the popular crowd. My tastes in music, art, and movies were too weird. I was awkward. I was not a very attractive guy. Generally, I was that “gay, artsy kid.” If I could go back in time, I would give that younger me a hug and say “you are FINE the way you are. You are AMAZING.”

This new work, AFFIRMATION (Grade 3) commissioned by the Barrington Middle School Band and their director, Mr. David Triplett-Rosa, is an anthem for all the kids who ever felt like they didn’t belong. It was originally scheduled to be premiered last year, but was pushed to this spring, and will be premiered April 8th. A huge thank you again to David and the band for letting me write this work and trusting me with its message.

It would have been easy to write something soft, lyrical, and saccharine, but I wanted to take a different approach…I wanted it to be a celebration.

This is the single happiest thing I have ever written in my career.

So this one goes out to the band geeks, the nerdy kids, the art kids, the drama kids, the punk rockers, the LGBTQA+ kids, the kids of color, and the all the people (kids and adults) who have ever been made to feel “less than” because of who they are.

You are JUST FINE the way you are.

And you are WORTH celebrating.

We all have more in common than we have different…our common humanity.